Version 0.1.8 of the Starstruck Vagabond alpha demo is out! And I'm experimenting with the stamina mechanics again. I wasn't happy with the pace of things when gameplay was revolving around waiting for stamina to grow back, so now every ship comes standard with a biscuit dispenser. Biscuits can be eaten for an instant stamina regain if you need it in the middle of a task. Fruit and veg offer a larger stamina boost since they're harder to find/grow.

So now eating is the main way to restore stamina; it no longer regenerates by itself, except during the piloting minigame. The reasoning behind that is, if the player wears themselves out with random work and then heads off on a long journey to their next objective, they don't want to get there and have to waste time building their stamina back up before they can get on with what they went there to do.

- Fixed a crash relating to the "fault" variable in the tutorial

- Stamina can now only be restored by eating, or by slowly regaining it by playing the inflight minigame

This is my first play through and so far the game looks promising. I did pick up some minor issues and a major issue while playing since yesterday. Also, some suggestions if I may:

- At the start when you insert your character name in the highlighted box, but did not press Enter, that highlighted box goes wherever you move up or down. You have to press enter for it to save. It's minor, but it's quite annoying. Suggestion would be that whenever you are typing your character name and accidentally move away, it highlights the next box with the default text in it and the previous box changes back to the default name.

- When you reach the Bihoa Sector on your way to Bihoa Prime, you received a distress signal. Once you travel to the signal, you enter the ship where you find someone asking you to squash zoobs on the ship with a crate. I went into the fuel room and suddenly these errors appear: 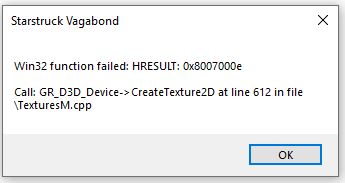 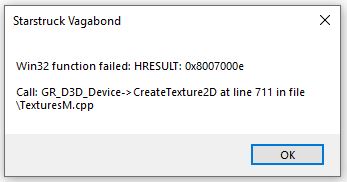 When I click OK and/or Close in the box, these errors just loops over and over again. The only way to stop it is to close the game. Luckily, the game AUTOSAVED after the distress signal, so I still have the option to continue to Bihoa Prime or go to the error loop ship. Just a sidenote, my laptop still uses Intel Integrated Graphics Onboard and it has been acting a bit dodgy the past few months. So, it could be graphics related or not.

- I use direction keys to move around which is fine, but in some areas, my character just moves slowly whenever I press up/down/left/right and then walks normal speeds. Outside the ship with the spacesuit it makes sense, but out of my suit its just random. I have to move sideways to walk faster. Again, its minor, but worth noting.

- Another thing that makes no logical sense is that the ship is parked outside of the planet whenever you do deliveries, yet your character travels down on the platform without a suit. It would have been forgiven, but when I go ontop of my ship, I am in space with my spacesuit. Isn't that dangerous? Yes, it's in Alpha, but it's worth noting that a safe place to part would make sense. Or maybe even a small ship that drops you at the landing zone with the crates you added onto the ship's platform thing.

Despite all of that, this game is quite promising and I wont mind paying for the full version once it's polished. I can see this is quite the ambitious project for one person, so I definitely understand if this game will be released at a later stage. Best of luck, Yahtz!

Just tried the newest patch and man, the tweaks have really helped the game. Personally, I love the new rotated screen. The eating for stamina also finally made that mechanic click. It's something proactive one can do and it's quick enough to naturally flow into the moving of goods. It also just feels right.

For future tweaks, I think the only thing I'd like to see would be an option in the menu to also hide the arrow and the current objective. From how I played the game, it was rare to have multiple objectives at once and the few times that happened, it was generally current money job + making time for the upgrade unit. So I'd love to have the option to have less guff on my UI. And with it being an option, it could be switched at any moment if a given player feels lost or whatever.