In this comedic twist on an idle game, the player must oversee the ever-improving life of an adorable dog, while not pressing the very red and tempting Button that Ruins Everything. Little do you know of the insidious forces that will soon be conspiring against your efforts. The seventh game in my 12 games in 12 months Dev Diary challenge.

Download
The Button That Ruins Everything for Windows 11 MB

Unpack the zip file into the folder of your choice and run devdiary7.exe.

This is my favourite one so far.

It's weird to write comments on these games. On one hand, I have thoughts and feedback and whatnot. On the other... well what did I expect, from a game made in a month? It's hard to fault much of anything made in such a short time frame.

If you're careful, the cat won't get you with any of his tricks. He runs out of new things to do and say fairly quickly on your first play, and then you're just sort of stuck watching a bar fill up slower and slower. Once you know how each trick works, it's basically just someone nudging you to make sure you're still awake. The game ends when your boredom exceeds your caring for the dog. After reaching that point, it's hard to get up the motivation to do it again- even if the cat does have some more silly dialogue after a restart.

Again though, what did I expect from a game made in a month? If I was trying to do that I doubt I'd even find the motivation to draw the necessary dog costumes in a month, much less actually make the game.

I will say, I do love that the cat wants to press the button because it's his snooze button, and not because he as a cat has some sort of infinite hatred for all dogs. I can relate to that. 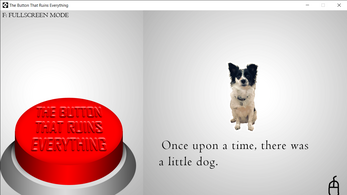 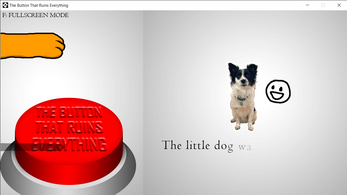 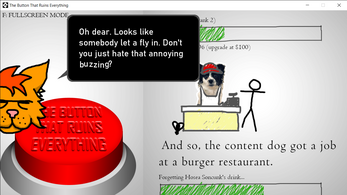 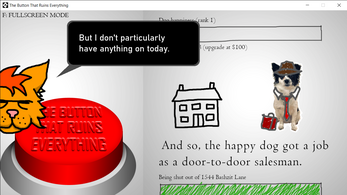 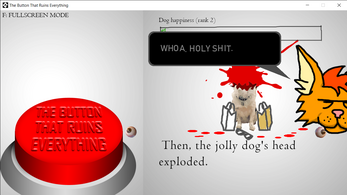