Help the cat burglar Trilby regain relevance in the age of computers as his new sidekick Casey Joint, a skilled hacker with the ability to control doors, computers, cameras and alarms. Play numerous hacking minigames that all in some way involve randomly mashing the keyboard in an attempt to simulate the cliched computer hacking you see in movies. The eighth game in my 12 games in 12 months Dev Diary challenge.

Unpack the zip into the folder of your choice and run devdiary8.exe.

Played this back when it first came out, but recently revisited it and god damn if it isn't still pretty great! Needs more opposition, though; I notice commenters mentioning a "ticking clock" element, like maybe the guards call in backup if you trap them in a room, but personally I think there needs to be a rival hacker; somebody to directly oppose Casey, an antagonistic force going after the player character themselves. It'd give the whole thing more tension and more personal stakes, having to fight an enemy who can challenge Casey on their level. Maybe they can "counter-hack" the programs the player already has control over. This would have the added benefit of preventing the "soft-locking" situation that one of the commenters below mentioned, where if you have all your slots full of one color key without anything to hack, you're basically screwed.

I know it's been a really long time since this game came out but I've really enjoyed playing it and especially seeing a continuation of Trilby and his little sprawled story. I'd be really interested to see some of these concepts expanded in a full game at some point if that's ever a possibility. I know this one was made as part of a dev challenge you were doing so I can only imagine how one would play with the level of development a title like Starstruck Vagabond is receiving at the moment. Casey is a super cool addition and a lot of the dialogue written for them had me chuckling more than I thought it was going to when I started.

Overall this was a really great experience. Please make more.

Like BRTV, I liked the idea of this one but felt it needed a lot more development. The need to scroll through all the objects was really annoying, especially because the interface glitches out if it gets too long. The game also felt too short -- I had a bit of a "Wait, it's already over?" moment when I beat the final mission.

The game felt a little too easy in general. I expected there to be some sort of limit on how often you could distract guards with laptops and cellphone hacking, but it's trivial to keep them constantly occupied. Similarly, cameras are trivially easy to hack -- I think I only got caught the first time I encountered one. (I also completely forgot that monitoring doors made them impassable to guards -- some way to review your abilities and what each object does wouldn't go amiss, I think.) There also wasn't any real penalty for failure, since you don't have any kind of ticking timer or drain on your money in the tertiary loop, and if Trilby subdues a guard you can explore the rest of the level with complete impunity. The game definitely needs more threats, like maybe a constant reinforcement of guards or a timer for the whole mission.

I also thought the minigames were a bit too random, or specifically the type of minigame you got was too random. They all take very different lengths of time to resolve, and obviously the ones that require you to type with specific sectors are harder than the ones that are totally random.

Still, I liked the core concept. The framing story was neat, Casey's social awkwardness was #relatable, and it was really cool to get something focused on the nerdy support character over the typical action hero. And I did find the typing minigames very fun despite your worry that they couldn't hold the game -- I was impressed by how many twists you were able to make on the concept to keep them from feeling too samey. I agree with your idea that the game could benefit from swapping to different character modes, especially since as it is Trilby does so little. I'd be interested if you planned to develop this further.

P.S. I'm sure a million people have told you this already, but Hacknet and Beglitched sound like games at least tangentially related to the concepts here. Add them to your compost pile of ideas, maybe.

Found a softlock bug: I closed the game during their conversation after finishing the tutorial level, since I triggered the alarm and wanted to reset for the bonus. Upon reopening the game, the post-tutorial conversation resumed, but Trilby was back in the first room of the tutorial heist, the door locked, I have no access to the red key software, and nothing does anything. I'll have to delete my save to continue at all, if I can find it.

Is there a way for me to play this on a chromebook?

I'm 7 months late, but I hear that Chromebooks have this thing where you can add Debian's software repositories and install Linux software. There's a piece of Linux software called Wine that is capable of running some Windows programs with finite success. I'm on Debian, and I can use Wine to run this game just fine.

I cannot remember the last time I had such a blast with a game, Holy Shit! The entire hour I was laughing, mashing the keyboard, tensing up as the guards came close, relieved when I found the right door to safety at the last quarter second... My goodness, what a game. Any changes would need to be very carefully introduced, as to not interrupt that core amazingness it has right now. (an upgrade highlighting the doors to your current room in the list is a no-brainer, though)

If anyone asks me for a hacker/stealth game to play, this is now my very first recommendation.

This was everything it was sold to be. Loved it. Especially the silly bloops during "hacking" sequences.

Found that with enough Monitors and patience, I could reliably stick with only a handful of the mechanics to easily sweep each heist (with the odd surprise camera). Not that I'd like to see this fully prevented, but maybe adding optional difficulties where guards become suspicious if they get trapped too long (distract could interrupt this), or a countdown that triggers after hacking a camera or alarm system (maybe until you manage to hack the security hub) to create some kind of time constraint would encourage some on-the-fly changes of approach.

Guards were also a pretty reliable way of scouting each map. More limited patrol routes, or guards that didn't carry phones (again, maybe limited to higher difficulties) would create a need to use a few more tricks or put yourself in a little more danger. Would maybe like to see a few more objects that needed to be interacted with directly. Weaponizing the guards to steadily expand control did feel great though, and played perfectly into the "case-the-joint" theme, so wouldn't want to see it diminished too much.

Noted there didn't seem to be much purpose to monitoring alarms or computers; would like to see some functionality added (or better telegraphed) there.

The dark web info dealer felt a little under-utilized; once I was comfortable with my approach, the only thing I was ever really tempted to get a heads-up on were the cameras. If different heists had emphasis on different security systems (cameras vs alarms vs guards), it might become valuable to buy forewarning as to which you were most likely up against, and then buy further details about locations. If keys were a little harder to come by - like needing to break into specific objects to get them vs just anytime via hacking minigame - that might also make the dealer info more valuable.  Maybe "basic" keys are infinitely re-obtainable, but keys for the "higher end" security systems are limited, and the vendor could be willing to sell you a few extra to start with, as well as info as to which ones you'd need.

Did like the introduction part way through of the second key set. Having to manage both added to the fun without adding too much complexity. Adding a "basic/simple" key alongside the two specialized ones might work mechanically without being too much to juggle.

Also: never tried, but did seem like it might be possible to soft-lock by filling up the inventory with the wrong type of key and having no way to spend them - might test that out at some point.

Navigating targets definitely feels a little jumbled and clumsy as-is, which was part of the motivation to play defensively. If this was streamlined a bit so that it was faster to select the target you needed [while panicking], I might've been more tempted to make some more aggressive moves. Maybe left/right to switch between "Nearby" and categories like doors, alarms, cameras, etc.

The defensive play was pretty satisfying though. Steadily exploring and taking over the map from safety, then waltzing around disabling locks, stealing data, and looting safes once you had complete control felt awesome. You raised concern as to whether the pseudo-hacking alone was enough to carry the game, but combined with the problem solving of casing and gaining control of the heist location it was thoroughly engaging.

Really enjoyed this it. Would love to see it expanded further. Could definitely see this getting developed into something a lot bigger.

This game is really fun. I would certainly like to see this game be expanded on.

~ A bigger tool set and market would be nice.

~ The sound/frequency lock is slightly difficult.

I love this one, I'm not even a fan of stealth games but I would love to see this as a full commercial release

Honestly, best game of the project so far. Would love to see expanded into a mix with "The Art of Theft's" gameplay, with stuff happening in the Casey layer affecting the Trilby layer vice versa.

Having trouble quitting and restarting. It starts me at the beginning of the most recent job, but without the money I earned after the first one, so I can't play beyond my first sitting. 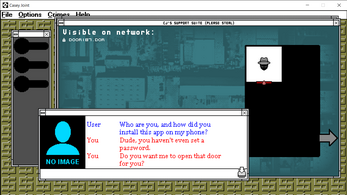 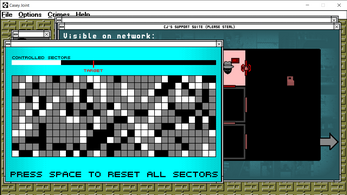 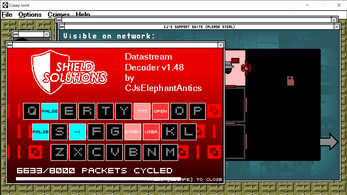 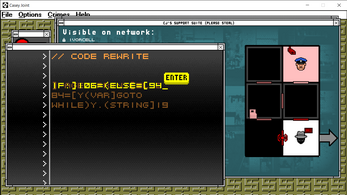 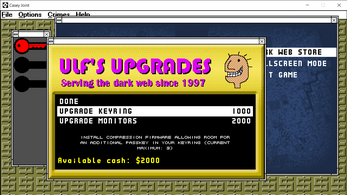