In H.P. Lovecraft's original story, Erich Zann was a mute viol player forced to play every night to appease mysterious horrors outside his bedroom window. Now, find out exactly what he was having to deal with. The fourth game in my 12 games in 12 months Dev Diary challenge.

Download
The Life of Erich Zann for Windows 13 MB

Unpack the zip file into the folder of your choice and run devdiary4.exe.

see, I thought you had to play long notes for any until I encountered the eye

I still don't quite get it

Well, I survived 9 days on my first playthrough

this game has such a lovely atmosphere, and I really do want to try and play it more, I quite adore it

This was my favorite in the series. The atmosphere was excellent and the gameplay was both unique and engaging. I loved the survival resource-management gameplay, it added a lot of tension. I also liked that running out of stamina didn't prevent you from playing, only moving -- the trembling of Zann's exhausted hands did an excellent job of conveying how screwed you were while still allowing you a little bit of hope.

(Party because of that, I found the stationary enemies much easier than the lines -- I frequently defeated the stationaries without a scratch, but almost always lost some lights to the lines. Maybe they could be balanced by taking more inspiration, or maybe draining stamina for the long draws?)

I agree with your assessment that it doesn't work so well as an arcade-style game. It was frustrating to just suddenly lose progress in the investigation passages because I couldn't pay rent. The rent in general was the biggest hurdle for me; I'd be surprised if anyone survived long enough to recover from a missed payment, since the resource drain is so severe that gimping stamina restoration is effectively a death sentence on its own.

The other thing is that I frequently fell behind in researching the new techniques. Are you supposed to encounter new monsters before learning the notes to counter them, or was I playing wrong? In general, I did find it frustrating to not be able to do anything in those situations -- it's basically random whether the appear often enough for you to survive at that point. I suppose it fits the theme of powerlessness, but it might have been nice to give the player something to do in those situations (and when you run out of inspiration).

One thing I did find a bit of an odd design choice was that some of the monsters could be reasoned out even if you didn't get the corresponding instructions (the eyes, rain, and inverts), while the colored lights did have hard gating. I feel it would have made more sense for it to be all of one or the other.

Overall, the game was very tense and exciting. I always think abstract, imperceptible horrors are much scarier than concrete monsters (as in "Something's in the Sea"), so the nightscape here was nicely creepy. I'd be very interested if you chose to make a full game out of this.

I like the theme, and the many unknowns woven together. No idea why I lost. I thought I understood the core nighttime mechanic, but apparently I don't. It seems that I'd just be meta-gaming to figure it out from here.

As with the other games, it works under linux via wine (use winetricks dxvk).

Great game, I love the research mechanic and frantic descent into madness as you lose the ability to sleep and research.

Reply
Neco The Sergal2 years ago

Interesting game, would feel like it'd take a few playthrough to really 'get the gist' of the game and what you're doing, or, doing wrong. 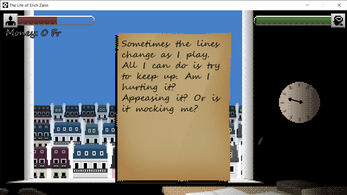 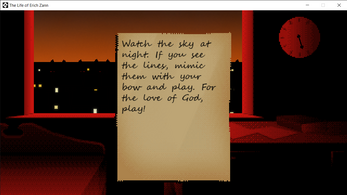 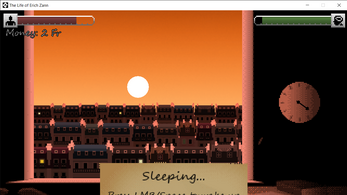 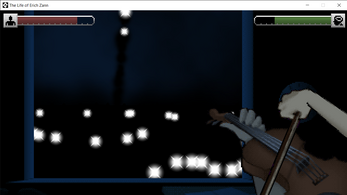 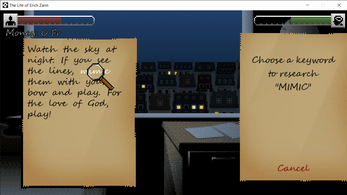