With a unique experimental rotation style of top-down shooter gameplay inspired by gun kata, Hogpocalypse Sow tells the tale of one man's attempt to defend everything he loves from a horde of ill-tempered swine - but what is the dark secret that lies at the heart of the invasion? The fifth game in my 12 games in 12 months Dev Diary challenge.

Unpack the zip file into the folder of your choice and run devdiary5.exe.

I liked the control concept, but the button layout was unusable. The quick turn needs to be bound to a central key considering how often it needs to be used as an essential aspect of both attack and defense, having it bound to Tab makes it easy to confuse with the Q or Caps Lock in the heat of the moment. You can also use it with one of the mouse buttons, but mouse movement is unreliable and without it you're forced to move and aim with a single hand.

My idea for a button layout, in case you ever update this with remappable buttons (which I think would have the best impact in allowing the ideal control solution):

Situating the quick-turn button near the other turning buttons and having the middle finger on it at all times will make it easy to reflexively use in a hairy moment.

Otherwise, I'm a big fan of the concept, even if I wasn't able to beat it! I might try making my own version in Unity at some point, once I'm done with my current projects.

And maybe the pigs are different colours because they're Democrats and Republicans forced to band together against your legendary gun kata skills. The power-up that makes all pigs the same colour is the player-character having an epiphany about the divisive and arbitrary nature of modern politics, before the life-threatening amount of PBR in his system promptly quashes it.

I know the controls are intentional, but sadly I just couldn't get the hang of them sadly - I LOVED the dialogue and sprites that I saw, however - I'll either go back to this and see if it clicks with me in future, or I'll watch a playthrough because I really want to see where it goes c:

It feels like your character is sliding around on ice, especially when you're turning and the fact that pigs can charge you from beyond the screen where you can't even see them is extremely annoying but otherwise it's incredibly fun for something made in a month.

More snappy movement and being able to see just enough to mitigate the issue of unseen charging pugs would have made it better though.

This was one of my favorites. I was initially dubious of the mechanics, but once I got the hang of them (and figured out the quick turn button) I got really into it. I'm not normally that into these sorts of top-down shooters, but the gun kata element gave it just the right amount of depth -- there's an element of puzzle-solving and not just shooting, since you need to take a moment to line up the correct shots. The framing story was also quite funny, and I loved the pig noises on game over, since pigs are adorable.

The hardest level for me was level 5 (with the flying pigs). The introduction both of a much faster enemy type and the more limited movement space proved really tough. I agree with your postmortem that the game would have benefitted from larger screen/area sizes.

It's a fun and satisfying game for the most part, but the controls feel inconsistent. Usually when I turn toward a pig, my character locks onto them, but sometimes, my character spins right past them, and I have to take time to re-angle myself to face and shoot the pig. This killed me a lot.

I saw other comments that mentioned gamepad support, but sadly, the game didn't seem to recognize my Buffalo Classic.

Using a keyboard, I felt this game nailed the premise of an elegant shooter among chaos, especially when racking up combos and last minute spins to avoid getting hit.  Tremendously unique sense of flow and accomplishment when you nail the shots and spins.  It's like the antithesis of hack and slash.  But the view was overly zoomed and so it required overly quick/difficult twitch reactions whereas I think the ballet-like concept requires being able to see your opponents coming in and quickly formulate a plan to elegantly shoot them.  I think 50% zoom out would allow for this and would increase the sense of flow from nailing longer combos.  I thought the auto-aim worked pretty well, but it did struggle during the levels where all pigs are coming from the same direction.

The fact that I have to re-play the tutorial every time I want to try the first level over again puts the entire experience through a shredder. The controls seem like they should be easy to get used to for me since I've played so much Contra III, but if I have to wade through 2 minutes of tutorial for another five seconds of attempting to learn the game, then I have zero interest whatsoever. This is an example of how one mistake born of a lack of playtesting and tank an entire game.

Reply
I am a B2 years ago

you know this entire game was made in a month, right?

That doesn't make it immune to criticism. Especially since this is a game made by a guy whose job it is to critique games. It's important to see where games fail, even when they're made under strict requirements like this one.

Reply
I am a B2 years ago

Really great concept, but held back by controls. Started with keyboard and had an absolutely terrible time. Switched to gamepad and fared much better, but still had some frustrations. The main one being that I felt completely at the mercy of the lock-on mechanic. Very hard to target pigs that are just outside of the target window, and would regularly swing right past pigs I wanted to shoot. Widening the lock on may have helped, as well as removing the little bit of lag between acquiring a target and being able to shoot. If there's a pig in line of the gun, I should be able to shoot it, even if I'm still spinning.

I couldn't get into the primary gameplay loop. The contextual comedy's fun. Though this did give me an appreciation for what it feels like, for people who do not know their lefts from rights. It feels like too much emphasis on that rotating mechanic. If there were some basic common mechanics to ease the player in, it'd give a more organic way to get in the groove. Perhaps just have the player smaller on the screen, and give some reason to explore the map a bit.

(Runs on linux via wine with winetricks dxvk)

Hogpocalypse Sow, but with a flashlight in one hand and a gun in the other - and also a bit of exploration. I'm thinking survival horror, since The Consuming Shadow has really left a good impression on me. I'd really love to see something along these lines in the future.

Congratulations on the great work in all the twelve games. You've been an inspiration to me for a long time =)

I felt a little disappointed by this one. What started out as a promising concept was brought down by poor controls, slow movement and screen sized levels. Making for a game that felt tetious and frustrating. 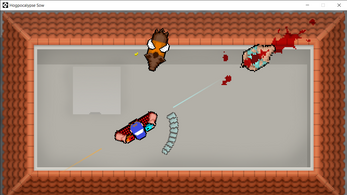 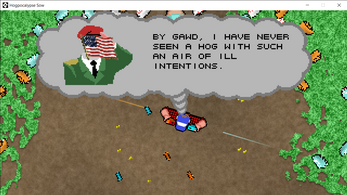 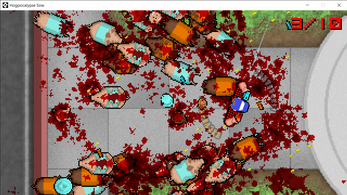 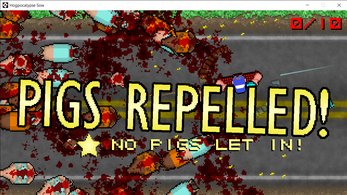 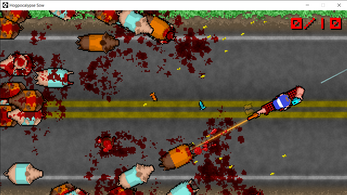